Tracing the inspiration for the Atkey and Company Georgian Collection. 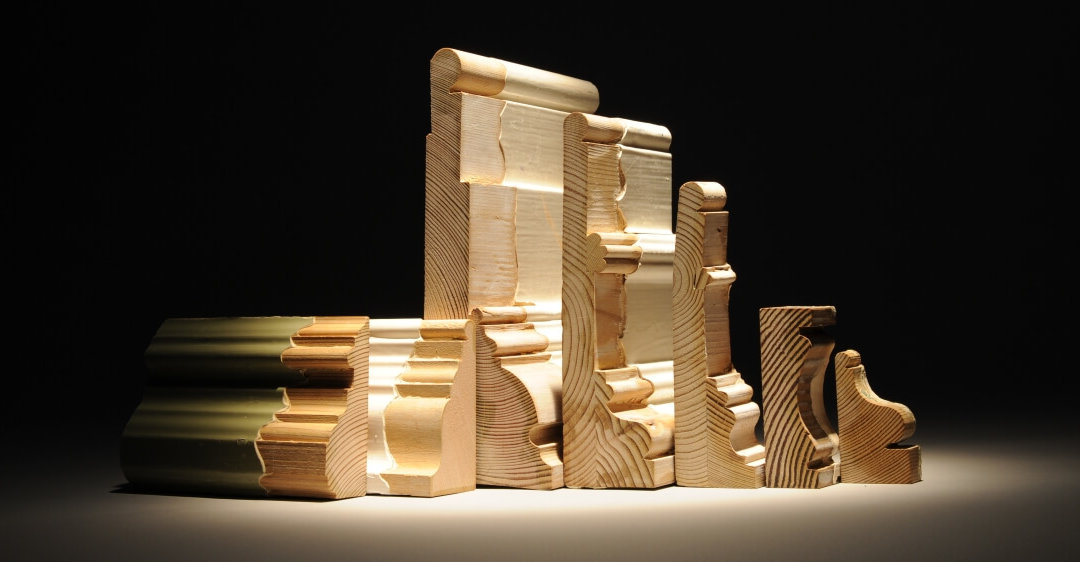 In a recent article we described the main characteristics of Georgian architecture. This article builds on that, giving examples of Georgian houses and Georgian buildings from which we have sourced authentic details of architectural joinery that have provided the inspiration for our Georgian Collection.

Our GDR0180 Georgian doors and accompanying door moulding GDM0180 are both archetypal examples of a ubiquitous Georgian design for a well-proportioned six panel door. They are complete with a stepped ovolo moulding and flat panels, all taken from an original example sourced from Bowood House by Robert Adam, dated 1750-60.

This house was originally built by Orlando Bridgman in 1725 on the site of an earlier hunting lodge. Then it was remodelled by Henry Keene in 1750s. In 1762 Adam was commissioned by William Petty, The 1st Marquess, to rework the Keene interior of the house and to build the magnificent orangery wing to conceal the service complex when viewed from the front of the house. The clock tower by Sir Charles Barry and the chapel were added later. This was only four years after Adam returned from his Italian tour where he made extensive drawings of Diocletian’s Palace, which he published in 1764 at the height of his fashionable popularity.

The original Adam house was demolished in 1955. Adam’s South ‘Diocletian wing’, with the Orangery and service quarters, remains. A Grade I listed mausoleum in the grounds built by Adam also still remains.

“…The skilfull will easily perceive within a few years a remarkable improvement in the form, convenience, arrangement and reliefing of apartments; a greater movement and variety in the outside composition and in the decoration of the inside an almost total change…. species of ornament formally known in this country are now universally exploded and in their places we have adopted a beautiful variety of light mouldings, gracefully formed, delicately enriched, and arranged with propriety and skill”. The Works in Architecture of Robert and James Adam Esquires, London 1778

Adam didn’t complete Bowood. After a disagreement over his proposed architectural scheme he left the site and works were completed by builder James White. George Dance the Younger (1741 -1825) made alterations after Adam’s death. Charles Barry was commissioned to build the Clocktower and further refurbish the house during the 19th Century. Renovations continue into the modern period. The interior of the Great Room was moved in the 1950s to Lloyds of London. The house was refurbished by current owner and interior designer Lady Lansdown – Fiona Shelburne in the 1980s to create a hotel, spa and golf club and today the house is both a home but also open to the public.

You can read more about architect Robert Adam and Atkey’s work on restoring some of his interiors here [link to the Adam article].

Our GAR0002 and GAR0003 architraves, as well as our GSK0004 skirting, dating from 1795, are all based on original sections sourced from Dropmore Park. These are early examples demonstrating the emerging influence of Grecian classical architecture over the more established Roman architectural detail.

Dropmore House in Buckinghamshire was designed in the 1790s for the then Prime Minister, Lord Grenville, a key figure in pushing through legislation to abolish the slave trade. Although lovingly restored in the 1950s this Grade 1 listed Georgian period house was sadly ravaged by two fires in the 1990s (the original moulding sections we have were salvaged between the two fires), and after a long period of abandonment it has now been fully refurbished as a single private residence.

Brothers James and Samuel Wyatt developed a refined neo-classical style for interiors akin to Adams. Samuel cut his teeth as a clerk of works at Kedleston (recently restored by the National Trust), before being introduced to London society to build the Pantheon Oxford street with his Brother James in the 1770s. He then went his own way to specialise in medium sized Georgian country houses with elegant interiors such as Tatton Park and Doddington Hall.

Our GAR0118 architrave is a Queen Anne period architrave dating from 1708, sourced from Royal Hospital Greenwich (also known as the Old Naval College). A typically pure and uncluttered detail from this period, its status is denoted by its depth of projection off the face of the wall. 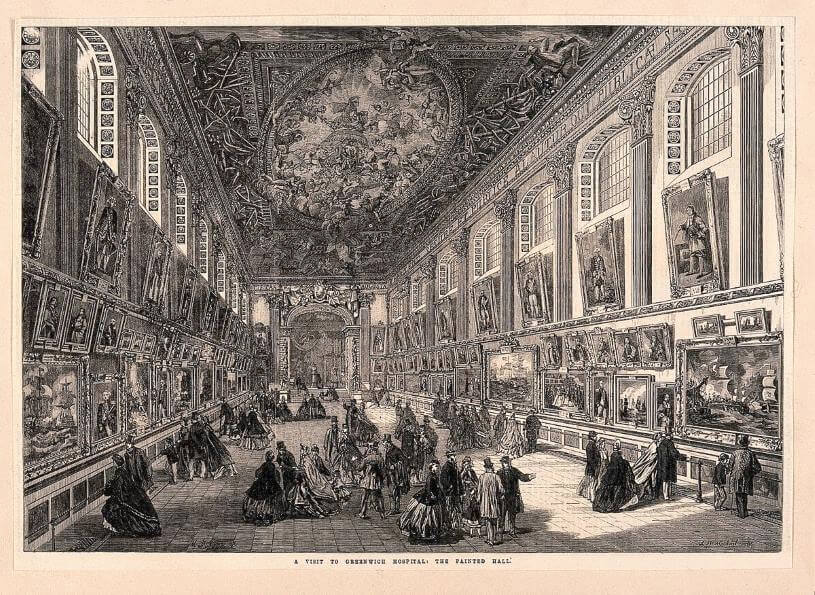 Perhaps the most iconic British Architect, Sir Christopher Wren designed this building, with Sir John Vanbrugh succeeding him as architect. Nicholas Hawksmoor took the lead as clerk of works through the project. It was built between 1694 and 1742 with later additions and used as an alms house for naval pensioners from its construction in the 1700s through to the end of the 1860s.

The painted ceilings and walls of the Painted Hall are a masterpiece of Trompe-l’œil, decorated by Sir James Thornhill directly onto plaster. The works are so beautifully integrated with the surrounding architecture that the painted hall is referred to as Britain’s answer the Sistine Chapel. A conservation project is underway to restore the painted surfaces. We are looking forward to seeing it in all its splendour after the painstaking work is complete.

Four products from our Georgian Collection derive from original architectural joinery mouldings in this building. This group of mouldings all date from 1730, and are very typical of their period, using Roman classical architecture as their inspiration.
GAR0201 – A one part architrave
GAR0202 – A high status, two part architrave
GSK0200 – A high status skirting board
GDA0198 – A dado rail

For over 200 years Hatton Garden has been famous as London’s jewellery quarter and the centre of the UK diamond trade. Number 26 Hatton Gardens was a residential property before becoming the City Orthopaedic hospital in the 1860s. It was demolished in 1907 and the interior of the house removed for display as an example of earlier Georgian interior design. After touring as part of an exhibition on Georgian interior architecture, it was put in storage at the Victoria and Albert Museum.

This catalogue entry to a V&A exhibition gives an insight into the design of the property and puts these architraves, skirting and dado rail in context:

“The panelled dining room, installed in the first half of the 18th century and photographed in situ in Hatton Garden before it was removed, had mahogany doors, moulded plaster cornices, decorative shields, elaborate gilded foliage carvings, carved wooden cornices and pinewood panelling, which would have originally been painted in hues of olive green and duck egg blue”. From Rachel Lichtenstein’s Book: Diamond Street: The Hidden World of Hatton Garden

Our GDM0184 Georgian period door moulding derives from the interior of Spencer House and dates from the years 1750-1760.

“From its conception the House was recognised as one of the most sumptuous private residences ever built in London and a building of unique importance in the history of English architecture. Designed by John Vardy and James ‘Athenian’ Stuart, the State Rooms are amongst the first neo-classical interiors in Europe”.
James Stuart (1713-1788) dedicated much time in Greece to research and published the first volume of ‘The Antiquities of Athens’ 1762, earning himself the appellation “Athenian Stuart”. He designed the frontage of Spencer House, a fine example of an 18th Century mansion, at number 27 St James’ Place. 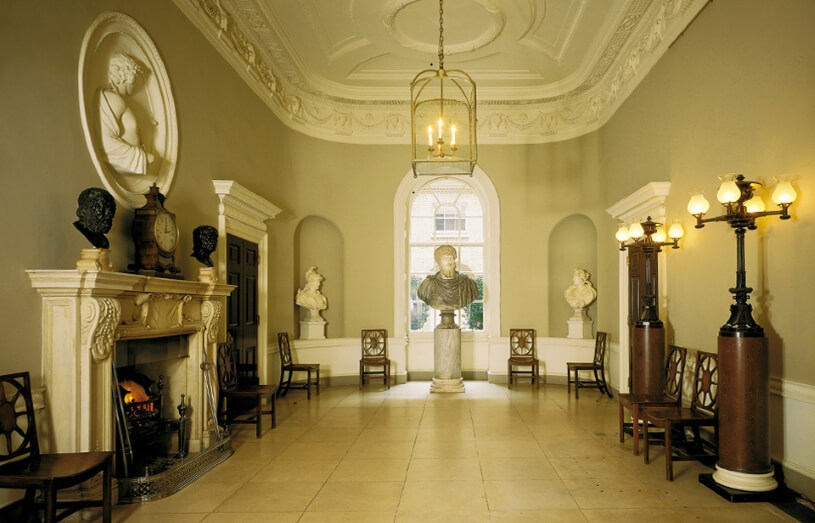 The authentic ancient Greek style was stipulated for both for the exterior and interior. As a result, Stuart’s work trailblazes the Neoclassical style that was to become so familiar in the country in the Georgian period and Spencer House is itself one of the finest examples of the Greek influence within Georgian architecture. After 1783 some of the interiors were partly remodelled by architect, Henry Holland including the large mahogany doors for the staircase hall, ante room and library.

This Georgian house is still owned by the Spencer family and remains one of a few aristocratic townhouses, once so fashionable within London Society, that is still intact today. Currently let to the Rothschilds the house has been subject to a 10 year programme of restoration to re-establish its original status as an exemplar of authentic Classical architecture. The restoration included replacing missing chimney pieces, doors, chair rails, skirting mouldings and architraves, were carefully copied from the originals which had been removed by the Spencer family to Althorp in 1942.

If you would like further information on our Georgian Collection please click here.
Case Studies about Georgian Period Doors and Mouldings include Contemporary Build in Henley on Thames and Georgian joinery prepared for a Country House refurbishment.
Here are some lovely images that show how to decorate a Georgian property (from House and Garden in March 2018)