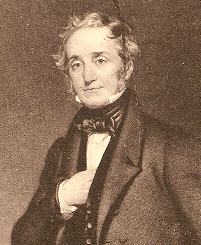 Thomas Cubitt (1788–1855), born Buxton, Norfolk, was the leading master builder in London in the second quarter of the 19th century, and also carried out several projects in other parts of England.

The son of a Norfolk carpenter, he journeyed to India as ship’s carpenter from which he earned sufficient funds to start his own building firm in 1810 on Gray’s Inn Road, London where he was one of the first builders to have a ‘modern’ system of employing all the trades under his own management.

Thomas had extraordinary amounts of energy, organizational skill, dedication to his men, and high principles. His reputation for integrity and dependability was impeccable. By the mid-twenties, he was active not only in Belgravia but “in almost every other expanding metropolitan district” (White 75).

At his vast works on his own stretch of the Embankment he brought together every branch of the building trade — a truly pioneering arrangement — and provided them with all the latest equipment and facilities, including a reading room and a lending library; he even arranged evening classes for his apprentices. Later he developed a new, equally state-of-the-art works site at Aylesford in Kent as well. By now he was a close friend of the royal family, having collaborated with Prince Albert on the design for Osborne House, which he then built for him. He also won the contract to extend Buckingham Palace, and it was Cubitt as well who orchestrated the dismantling of Nash’s Marble Arch there, and its reassembly at Hyde Park, ready for the Great Exhibition.

Cubitt had a good reputation in literary circles, too. For example, having built much of Tavistock Square in the twenties, his firm later extended Tavistock House for Dickens.

He was commissioned in 1824 by Richard Grosvenor, 2nd Marquess of Westminster, to create a great swathe of building in Belgravia centred around Belgrave Square and Pimlico, in what was to become his greatest achievement in London. Notable amongst this development are the north and west sides of Eaton Square, which exemplify Cubitt’s style of building and design. The scale of Cubitt’s work is astounding. In Nineteenth Century Architecture in Britain, Reginald Turnor says of Cubitt, “Pimlico and Clapham, terrace after terrace and square after square, were later ventures in which Cubitt improved upon all the speculative building which had ever done before, or, one supposes, will ever be done again.”

In 1827 he withdrew from the management of the business he had established at Gray’s Inn Road leaving such matters to his brother William Cubitt; the firm of Cubitts still carried out the work of Thomas Cubitt and the change robbed neither of the partners of the credit for their work.

From 1839 Cubitt was an active member of the Institution of Civil Engineers; he was a leading figure in the campaigns for a main drainage system and a more extensive Thames Embankment, and rooted for limiting smoke emissions and conserving open space: Battersea Park owes its existence largely to him.

He died in 1855 and was taken from Dorking for burial at West Norwood Cemetery on 27 December 1855. After his death, Queen Victoria said “In his sphere of life, with the immense business he had in hand, he is a real national loss. A better, kindhearted or more simple, unassuming man never breathed.