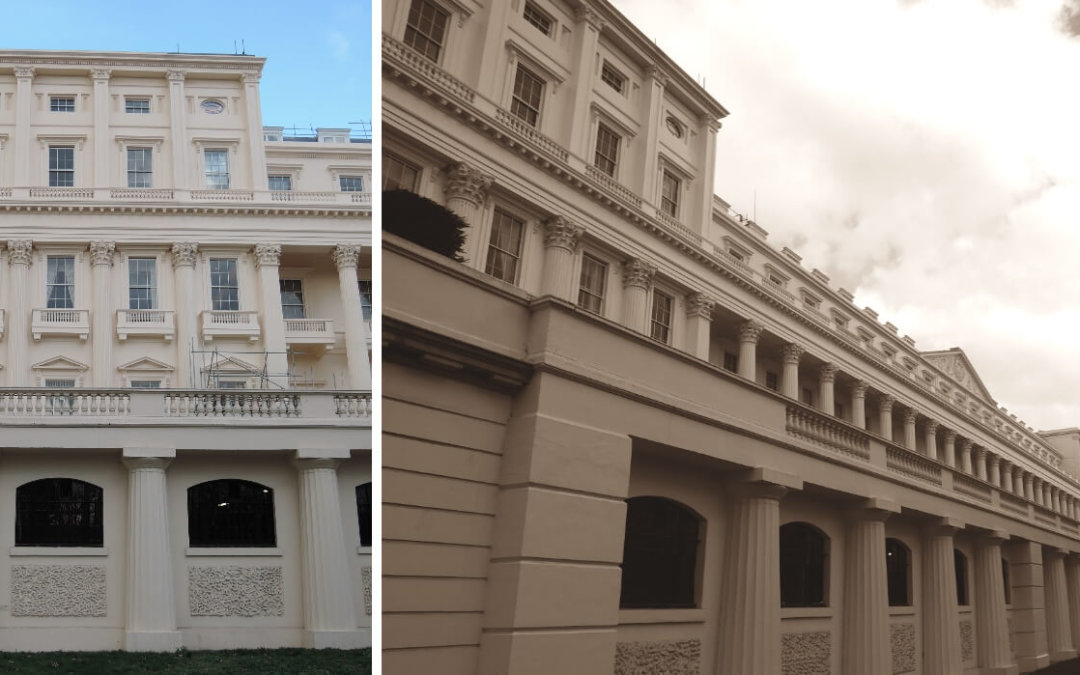 John Nash was one of the most successful, prolific and influential architects of his generation, responsible for the impressive Regency streets, squares, terraces and crescents that give London much of its unique character to this day.

Nash is synonymous with Regency style. His beautiful exterior urban designs stand the test of time, but his interior designs are less well known. The interiors of Nash’s properties were designed simply with the knowledge that they would adapt with changing fashions and use over time.

Atkey and Company have had the privilege of being involved with projects to restore, or reinterpret, interior architectural joinery behind a number of Nash’s iconic facades.

Innovating Georgian Designs with the Picturesque

Born in 1752, John Nash apprenticed with the Palladian architect Robert Taylor before setting up independently in 1777- 8. In this early London period, his influences were Georgian. He built some of London’s first stucco-clad houses in Bloomsbury before bankruptcy forced him to move back to his native Carmarthen. Architectural commissions flowed in and he built three gaols as well as numerous country houses for the local gentry.

In 1789, Nash went into partnership with Humphry Repton, the fashionable Picturesque landscape gardener. Together they forged a highly successful reputation as designers of elegant villas and small country seats in settings carefully landscaped to evoke the Romantic qualities of nature untamed.

In this crucial period, he met advocates of the Picturesque movement, a design concept and style characterised by pictorial values of architecture and landscape in combination with each other. This would push his adherence to the strictures of Georgian design and lead him to experiment and shape the Regency detailing we associate with his later London commissions.

By 1797 Nash had re-established a lucrative practice in London building up a clientele of nouveau riche bankers and merchants, as well as gentry and minor nobility.

Over the next 15 years, he built or remodelled about 40 houses in a number of different styles, but most notably the ‘Regency castle’ manner of Luscombe in Devon, Caerhays in Cornwall and Knepp in Sussex. He also designed lodges, dairies, model farms and stables, and pretty cottages ornées, such as Blaise Hamlet in Somerset.

John Nash was now a wealthy man with high society connections. He became a great friend of the flamboyant and extravagant Prince Regent (who later became George IV). In 1806, he was appointed architect to the Surveyor General of Woods, Forests, Parks and Chases and from 1810 Nash worked almost exclusively for his royal patron.

As the Prince’s favourite architect, he was commissioned to develop significant swathes of central London. This included a dramatic vision for the layout of Regent’s Park, with private villas set in a Reptonian landscape surrounded by palatial stuccoed terraces.

From there, a great thoroughfare running north to south from Park Crescent, down Portland Place and Regent Street to the site of Carlton House, was conceived as a royal route linking the Prince’s residence to Regent’s Park. Nash designed some of the grand façades, and, to disguise kinks in the route, created the Quadrant Piccadilly, and All Souls, Langham Place, all to highly Picturesque effect.

There were other associated central London schemes, and, from 1823, he lived ‘like a prince’ in a pair of town houses he had built in Lower Regent Street. He also developed what became the Royal Pavilion in Brighton, remodelled Buckingham Palace and was commissioned to design the Royal Mews and Marble Arch.

John Nash was a brilliant urban planner who was a master at incorporating a wide variety of styles, ranging from the classical to the gothic, into his architectural designs. He excelled at harmonising buildings with their settings and enhancing the picturesque character of a place.

Although his designs harked back to earlier architectural styles, he was quick to adapt to new methods, materials and technologies. In particular, he did much to popularise the widespread use of stucco to clad facades of brick and pillars of iron as a means of imitating the look of stone when creating giant columns, pilasters and smaller ornamental touches.

Nash is best known for creating imposing exteriors with scenic effect. By contrast, his interiors tended to be simple and unadorned. This is particularly true in his London designs. This approach provided blank canvases for interior designers to style as they wished, providing ample room for clients to express their individuality and add their personality as styles and fashions changed. Over the last 200 years, Nash’s exteriors remain largely unchanged, but his interiors have been redecorated and remodelled many times over to reflect individual tastes and changing trends.

This process continues today, as new owners either wind the aesthetic clock back to restore interior details from a particularly period or create contemporary interior designs. Thus, modern and period interpretations within Nash’s properties both have merit and are consistent with his flexible interior design principles.
A small window into the world of Nash interiors comes from the period in which he returned to Wales and originally experimented with introducing innovations to rigid Georgian rules of design.

Flexible Interiors that Offer a Wealth of Design Possibilities

Undertaking the restoration or contemporary remodelling of such flexible interiors poses challenges for designers. Partition walls, staircases and doorways may not align with the exterior design features, such as windows. This may require bespoke architrave, skirting, and panelled joinery commissioned to fit around unusual or unaligned architectural features.

What’s more, the process of reinstating architectural joinery that faithfully replicates authentic period detail requires a creative choice. Designers can go right back to the original Regency era, or choose to recreate a subsequent period, such as the Victorian or Edwardian. Then again, the designer might decide that a contemporary scheme, but one in keeping with the building’s original character, is preferred.

An Invaluable Resource for Interior Designers

Atkey and Company have an extensive archive of period features and encyclopaedic knowledge of architectural joinery detail over the past 500 years. This means we are uniquely well placed to advise, assist and supply interior joinery appropriate for Nash’s properties. It is no surprise, therefore, that we have been privileged to work on many projects behind some of John Nash’s most famous facades – Chester Terrace, York Terrace East, Cumberland Terrace, Albany Terrace, Brunswick Place, Gloucester Gate, Hanover Square and Carlton House Terrace in Westminster, part of the Crown Estate.

Our Regency period collections are highly in demand with designers keen to create interiors with authentically detailed doors, architraves, dado rails, picture rails, skirting boards and plinth blocks from that era. We also offer a contemporary doors collection that distils over 300 years of British aesthetic detailing into a collection of stylish modern interior doors that are very much at home in period interiors.

Atkey and Co have recently collaborated with the Sir John Soane Museum in Lincoln Inns Fields, London to reproduce original joinery from their archive collections. Sir John Soane was not only a contemporary of John Nash, but worked with him on a number of projects, and this enables us to recreate Georgian and Regency mouldings directly from the Soane archive.

The team at Atkey and Company are more than happy to share our expert knowledge, specialist skills and extensive resources with clients, architects and designers across a diverse range of projects.

Whether it’s advising on the appropriate, authentic and accurate use of period detail, or discussing technical issues relating to door specification, we are here to answer your questions.