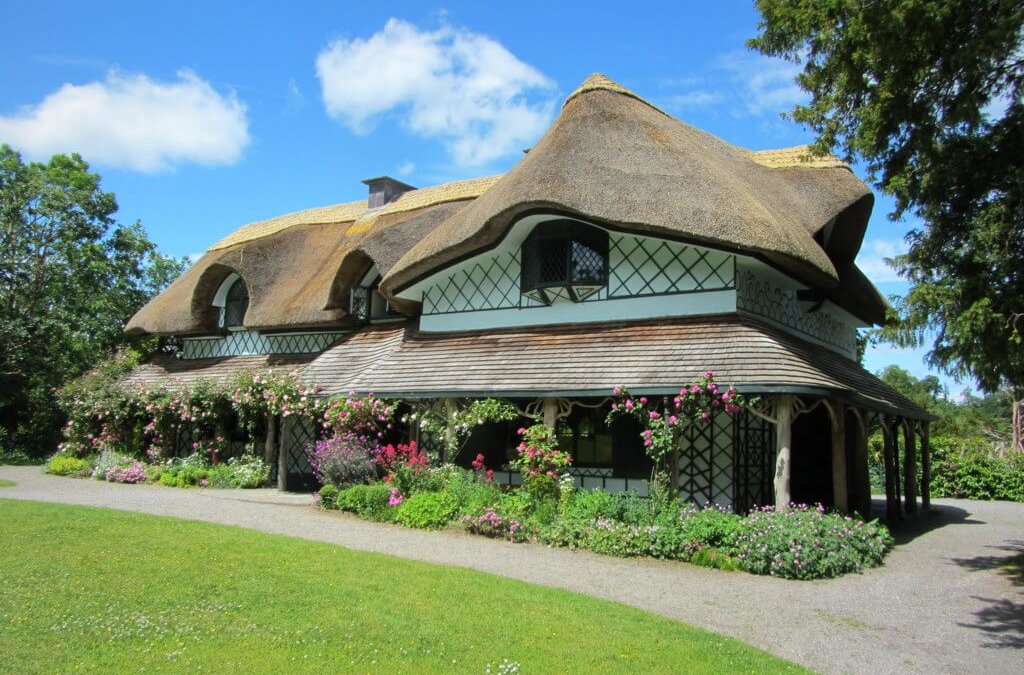 Cottage orné, translated as decorated cottage, dates back to a movement of ‘rustic’ stylised cottages of the late 18th and early 19th century

To be considered an authentic cottage orné, the cottage must conform to a certain set of stylistic guidelines which made it compatible with a picturesque landscape. Typically, a cottage orné was a relatively small building, often with an obviously asymmetrical plan and above all, it must be in a deliberately rustic style, which usually included a thatched roof. Those thatched cottages that had an undulating roof line were considered the most ideal exemplars of the form. There were some cottages orné without thatched roofs, but they were far less common.

The majority of these cottages, in keeping with their purported rustic style, were of only one, or sometimes two stories, but seldom higher. And, in most cases, the second storey was concealed by the depth of the thatched roof, making the cottage appear to be only a single storey from the exterior.

Other architectural features which might be incorporated into the design of a cottage orné included latticed windows with panes set on the diagonal, typically in casement-style frames, ornate bargeboards on the gable ends and elaborate, oversized chimney-stacks. Verandahs were also popular, and, in an effort to make them look especially rustic, many were supported by unfinished, bark-covered tree trunks, just as they came from the forest. These verandahs were sometimes embellished with a trellis over which flowering vines were trained to grow. Ivy was sometimes used, but woodbine and climbing roses were the preferred and fashionable climbers during the Regency. Climbing plants of various types were often encouraged to grow over other parts of the cottage.

It was generally considered that all this enveloping foliage added to the picturesque appearance of the cottage by giving the impression that it was anchored into the landscape with the materials of nature itself.

There were a few cottages orné which were built in the later decades of the eighteenth century, though they had not yet acquired that label. They were the result of a combination of the growing appreciation of the concept of the picturesque among the landed gentry, and the growing influence on that class of the writings of Jean-Jacques Rousseau on the concept of the natural man. Under these influences, it became fashionable among wealthy, educated landowners to indulge in the fantasy of these twin concepts by idealizing certain aspects of country living. These fantasies were typically made manifest in rustic cottages which these landowners had built on their properties. However, in most of these early rustic cottages, the emphasis was on the exterior, very little effort was expended on the decoration of the interior. In a few cases, the interiors were left bare, but most contained simple furnishings in a rustic style.

However, as the nineteenth century turned, the cottage orné was sometimes referred to as a gentleman’s residence in fancy dress. As such, the interiors of many of the more elaborate cottages built by wealthy gentlemen became ever more ostentatious and extravagant. Walsh Porter’s Craven Cottage was one of the most extreme examples, with its Egyptian Hall, Tudor-Gothic Dining Room, the Tartar Chieftain’s Tent, the Lion’s Den chamber and the robber’s cave, which could be entered only from above. But not all cottages orné were decorated so flamboyantly.

Because many of these cottages were used as summer homes, and by virtue of the fact that they were cottages, they were rather smaller than most primary residences of the wealthy. For that reason, they were usually filled with a host of beguiling novelties which were intended to save space and still provide many of the modern conveniences. Some had beds which could be folded up to be concealed in the wall during the day. Dressing tables and wash-stands were constructed so that they might fold down from the wall, or swing into it to be hidden away when not in use. Many interior doors were pocket doors, that is, they slid into specially-made pockets in the walls, rather than being hung on hinges. There was at least one cottage orné which had the windows in the drawing room specially fitted with mirrored glass which slid up out of the window frames at night to cover the windows. These mirrors would serve to reflect the candlelight, thus increasing the illumination in the room after dark. Cabinet-makers were often asked to construct furniture for these cottages which served multiple purposes, such as compact desks which also included bookshelves, sideboards which included small wine coolers and wine racks, even beds, chairs and stools with hidden storage areas.

Not all cottages orné were purpose-built in the rustic style. There were many small buildings which were given overtly rustic features in order to convert them to cottages orné in the late eighteenth and early nineteenth centuries. A pavilion had been built at Kew, in 1770, for Queen Charlotte. In 1805, it was embellished with a half-timbered second storey and a thatched roof, after which it became known as the Queen’s Cottage. Craven Cottage is another example, for Walsh Porter took a pretty little summer cottage and turned it into an elaborate cottage orné in 1805. There were a number of property owners who decided to remodel an existing building on their property into a cottage orné, thus saving both money and time in achieving their end of adding the latest fashion in garden ornaments to their picturesque estate grounds.

For those not on a budget, a cottage orné could be extremely elaborate. John Nash designed an entire village of such cottages in 1810, which were built to create Blaise Hamlet in Gloucestershire.

Also in 1810, Sir Jeffry Wyatville designed a cottage orné as one of the most important of his early residential commissions. Endsleigh Cottage, in Devon, was built for the Duke of Bedford at enormous cost as a country retreat for his duchess. The site was landscaped by Humphry Repton, in the picturesque style, then Wyatville designed the cottage to ornament the grounds. It was one the first examples of the full-fledged cottage orné style built in England, with a deep thatched roof and verandahs supported by complete tree-trunks on three sides as well as multiple ornate chimneys.

In 1813, the Prince Regent commissioned John Nash to convert a small house which had been occupied by the Deputy-Ranger into a cottage orné in Windsor Great Park. It is unlikely that the Regent had any intention of saving money in the construction of his personal cottage orné by choosing an existing building. Rather, his new cottage would be finished more quickly if built over an existing structure. It is estimated this royal cottage orné cost at least £200,000 and was given a thatched roof, mullioned windows, and a long verandah with vine-covered pillars. It was also furnished very elaborately, in a rustic style. This ornate cottage came to be known as the Royal Lodge when, as king, George IV further enlarged it and often held grand dinners there.

The cottage orné style had become a fully-defined and very fashionable architectural style by the time the Regency began. It remained popular throughout Britain right through the Regency and the reign of King George IV. But within just a few years after the king’s death, the cottage orné style was swiftly falling out of fashion. By the time his niece, Victoria, came to the throne, there were hardly any cottages orné built in England. However, the style did remain popular in America well past the middle of the nineteenth century. During the Regency, there were many fashionable cottages orné constructed on many large estates across the British Isles, used for many purposes.