Architecture of the Regency Period – Inspiration From Many Sources

Architects from the Regency period experimented with a wide range of styles, including Egyptian, Indo-Chinese and heavy Greek. The Regency Period in British history, and associated art and architecture, gained its name from the nine-year period, 1811 – 1820, when the Prince of Wales was Regent. The prince became King George IV in 1820 and his reign ended with his death in 1830. The prince’s patronage played a role in the styles of art and architecture popular during the Regency Period.

Sources from around the world greatly influenced Regency Period architecture, including Egypt, the Near East, Middle East and Asia. The greatest influence was ancient classical Greek architecture. It was a classical revival, but more archaeologically correct than the earlier 18th-century English Neoclassical style. Aiding the focus on authenticity were recently published, lavishly illustrated books with images of Greek art and architecture. Anyone who wanted to use the style had ready inspiration drawn straight from the source.

The Royal Pavilion, also known as the Brighton Pavilion, is an excellent example of this influence. It was built in three stages as a seaside retreat for the Prince Regent, built in the unique Indo-Saracenic style prevalent in India for most of the 19th century. The current appearance of the Pavilion, with its domes and minarets, is the work of architect John Nash, who extended the building starting in 1815. The fanciful interior design, primarily by Frederick Crace and the little-known decorative painter Robert Jones, was heavily influenced by both Chinese and Indian fashion (with Mughal and Islamic architectural elements). It is a prime example of the exoticism that was an alternative to more classicising mainstream taste in the Regency style. 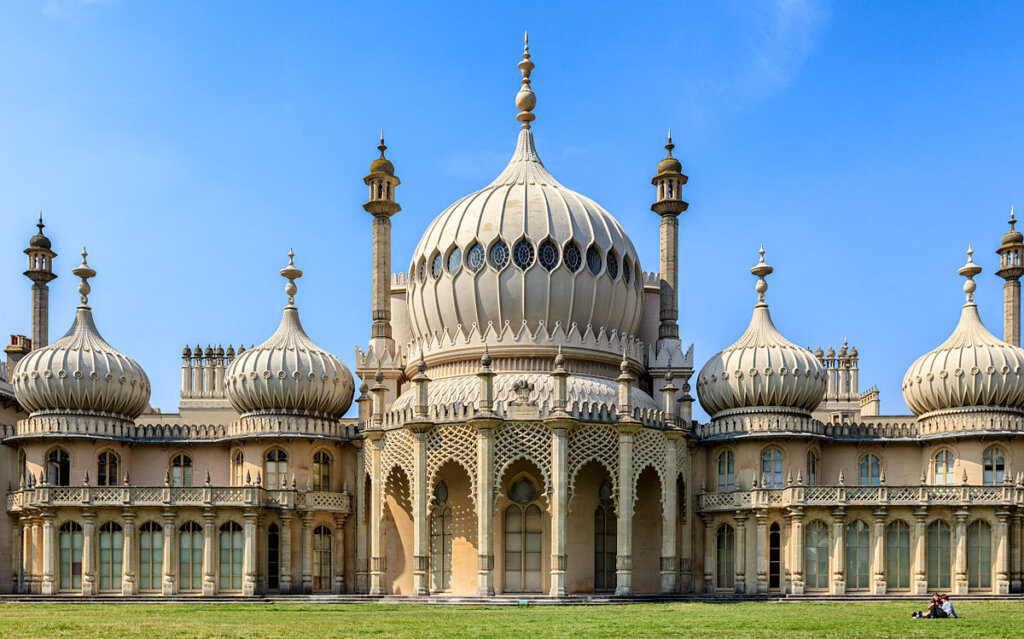 Regency architecture also used elements of ancient Egyptian art and design, which came to public attention at the end of the 18th century when Napoleon’s campaigns in Egypt were accompanied by archaeological surveys. Information and images related to the finds made their way back to England and caught the imagination of architects and designers.

The Egyptian Hall was commissioned by William Bullock as a museum to house his collection, which included curiosities brought back from the South Seas by Captain Cook. It was the first building in England to be influenced by the Egyptian style, partly inspired by the success of the Egyptian Room in Thomas Hope’s house in Duchess Street, which was open to the public and had been well illustrated in Hope’s Household Furniture and Interior Decoration (London, 1807). Unlike Bullock’s Egyptian temple in Piccadilly, Hope’s neoclassical façade betrayed no hint of the Egyptianizing decor it contained. 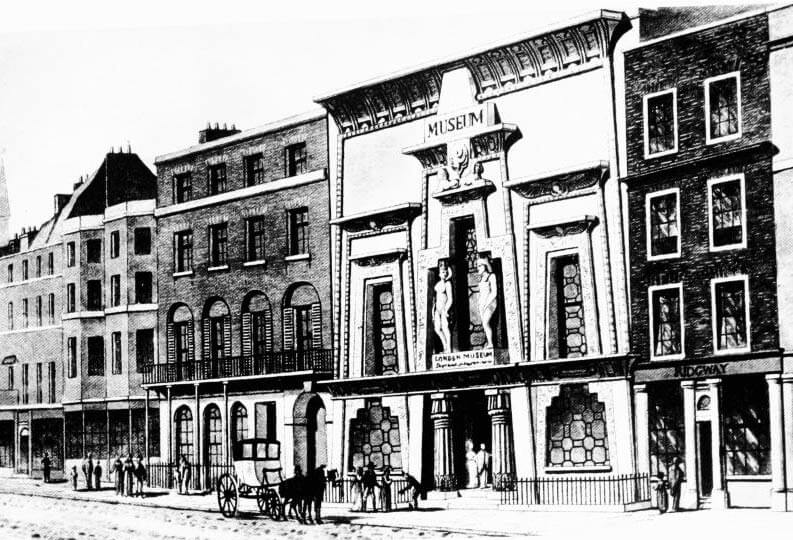 John Nash (1752-1835),  served as court architect for Prince Regent and later King George IV. Nash designed many classically-influenced structures, including the terrace houses at Regent’s Park. Terrace houses were row homes, with each dwelling sharing one or two walls with those next to it. The structures had clean, classical lines with unadorned arches and other understated elements.

Cumberland Terrace was one of these terraces. The terrace was to stand opposite the Prince’s proposed palace in the park and was therefore of particular importance in the scheme. It was built by William Mountford Nurse, with James Thomson serving as resident architect, and was completed in 1826. It consists of three main blocks, linked by decorative arches with typical neoclassical style and grandeur. The central block includes a large sculptural pediment by J. G. Bubb above a long colonnade of Ionic columns.

Sezincote is a Mughal Indian palace set in the Cotswold Hills. The house was designed by Samuel Pepys Cockerell, built in 1805, and is a notable example of Neo-Mughal architecture, a 19th-century reinterpretation of 16th and 17th-century architecture from the Mughal Empire. 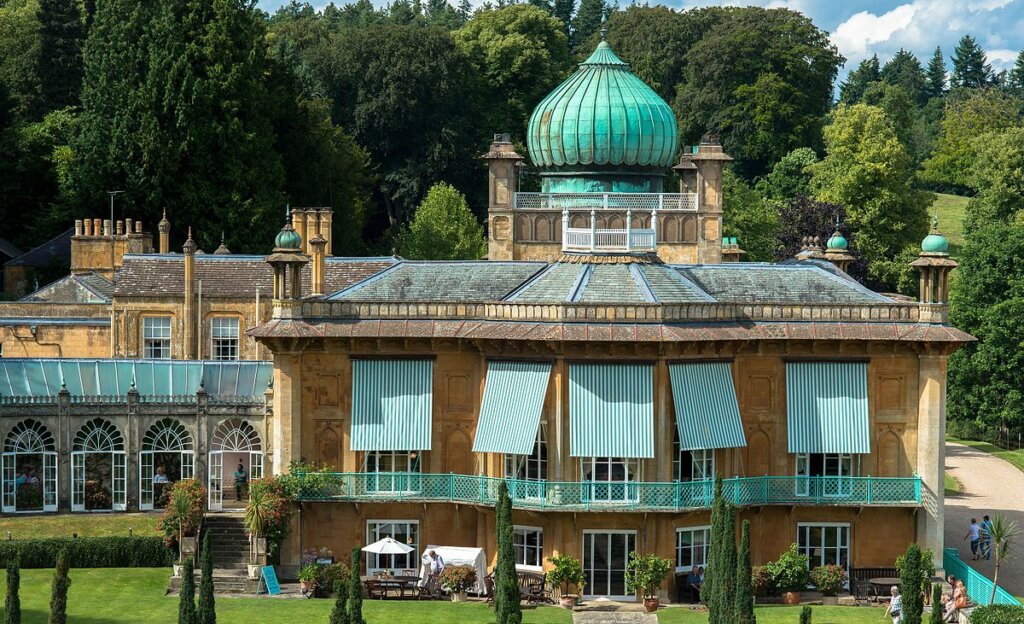 The house is surmounted by a copper dome and minarets, and set in a picturesque water garden with seven pools, waterfalls, a grotto and a temple to Surya, the Hindu Sun God. A curving Orangery frames the Persian Garden of Paradise.

Pell Wall Hall, a Regency house in Shropshire, was Sir John Soane’s last residential commission, completed in 1828.  He regarded it as the culmination of his life’s work. In 1986 the house was gutted by fire with the near-complete loss of all the internal detail. Over the next fifteen years and with the aid of a £1m grant from English Heritage the house was made watertight, yet remained largely untouched until its purchase in 2010 by the current owner. 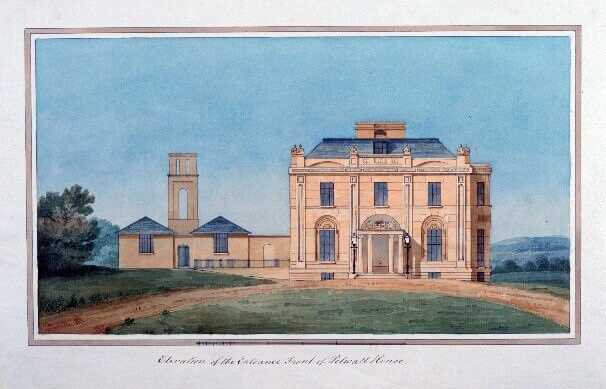 Atkey and Company was appointed by the new owner to advise, design and manufacture all of the timber mouldings, doors, door linings, window reveals and shutters that are now installed. Full details of the restoration can be seen here .